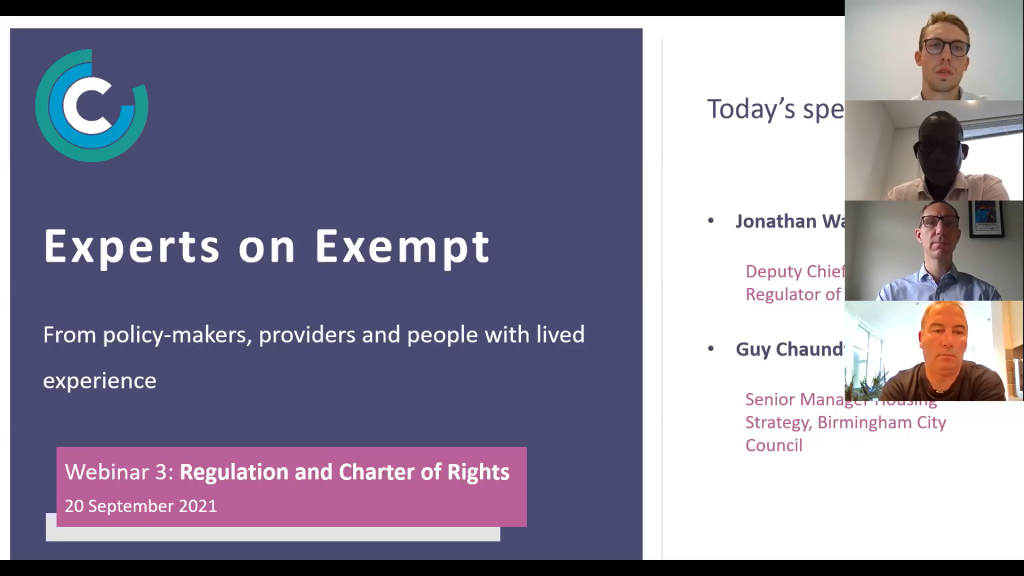 REGULATION AND CHARTER OF RIGHTS: exempt regulation “from another age” says RSH

Regulation covering exempt accommodation is not fit for purpose according to the Regulator for Social Housing (RSH), with Deputy Chief Executive Jonathan Walters believing it “from another age”.

Walters told listeners of the third Commonweal Housing webinar on exempt accommodation as part of the Experts on Exempt series that, given much of the legal and regulatory framework for the sector was devised in 1996, the Regulator has struggled to maintain authority over a rapidly adapting market.

With the lack of modern revisions to the exempt accommodation framework, some organisations have circumvented the system and therefore do not fall within the RSH’s jurisdiction. “We have begun to see organisations migrate the stock and the tenants out of the regulator sector and try and operate the same model outside,” Walters said. “There are no easy answers”.

Indeed, although the Regulator is offered certain powers, this is limited by the fact that it has a “split remit”. “We are responsible proactively to ensure all organisations that are registered with us are well governed and are viable and are charging the right rents. But we’re only allowed reactively to regulate them on the quality of services they’re delivering. Crucially we’re not allowed to go out to look for those examples of poor quality of services, they have to be referred to us.”

As a result of some restricted Regulator powers, the RSH has been working more closely with local authorities, particularly Birmingham City Council, where the number of exempt accommodation units has doubled in just three years and is one of the most acutely impacted cities in the country.

Walters says the RSH has been “making changes to some of the boards of [poor-quality] organisations because what we’ve found is very poor governance.”

Guy Chaundy, Senior Service Manager for Housing Strategy at Birmingham City Council and co-presenter for the session, has seen first hand the impact poor providers have had on the city. One of the issues he highlighted around regulation was the Department for Work and Pension’s limited definition of “care, support or supervision”.

He noted that “Registered Providers are providing supported housing and are exempt from mandatory, selective additional licensing and HMO management regulations” therefore creating a vacuum of responsibility and regulation.

However, the Department for Levelling Up, Housing and Communities (DLUCH, formerly MHCLG), has introduced a series of exempt accommodation pilot schemes across the country, including Birmingham.

“The pilot has allowed us to do two monthly reviews into providers.” Chaundy said. “We have controls for HMOs (house in multiple occupation) and planning controls, and we have introduced Article 4 which does place some restrictions in terms of numbers and concentrations of HMOs, unfortunately however exempt accommodation is exempt from that so we can’t control growth through that route.”

The Council has itself made attempts to crack down on poor providers, and improve consumer standards.

Earlier this year, Birmingham City Council introduced the Charter of Rights and Quality Standards for exempt supported housing. “The key thing we wanted to do was to get some form of accreditation scheme in place in Birmingham,” Chaundy said, with the intention to “create enhanced standards to ensure consistency and accountability. This has provided citizens with information on what they should expect from provider and escalation routes.”

You can catch up on sessions one and two of our five-part series, by clicking the below links.