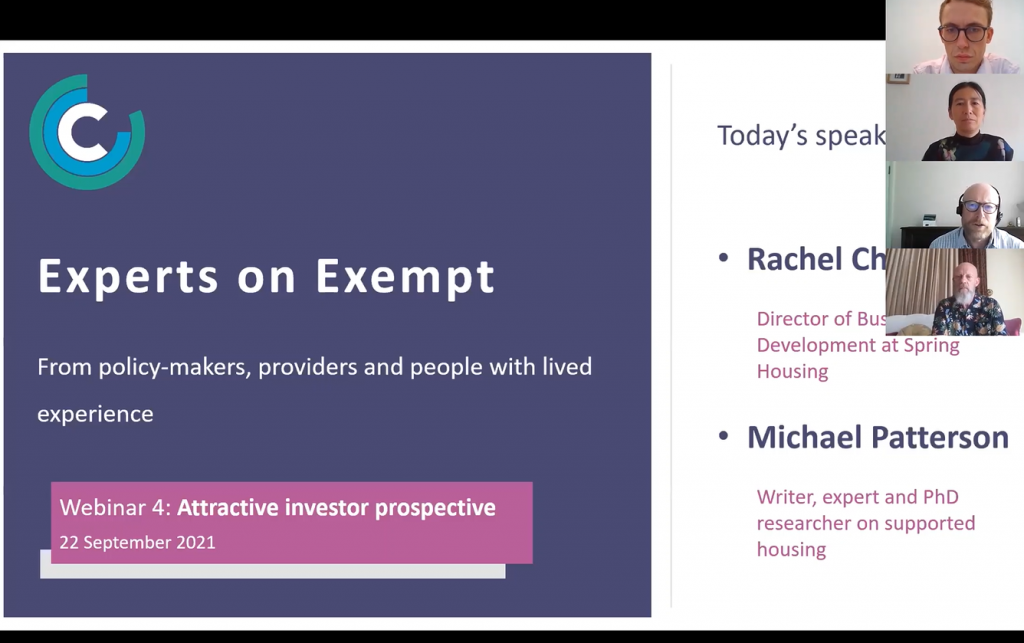 Patterson spoke at Commonweal Housing’s fourth webinar in its Experts on Exempt series, making the case for a “values-driven approach”.

Establishing “reasonable” yields, which Patterson suggested at a 6 percent annual return on investment, should be the starting point, but efforts should also be made to ensure that property valuations are based on the market sale value of the asset not “the potential revenue yield or the flip cost”.

Patterson did state that there must be “comfortable levels of revenue for the operation of supported housing”.

Rachel Chiu, Director of Business Development at Spring Housing, agreed with Patterson, but also emphasised the need for a mass implementation of a Charter of Rights and Quality Standards, such as those championed by Birmingham City Council, ensuring the better protection of tenants. This, Chiu argued, should be strengthen by tightening referral routes from services and local authorities to providers to only use bench-marked quality providers.

The need for a reformed exempt accommodation sector is clear: exploitation of the system and individuals has been enormously detrimental to what could and should be a positive intervention that protects the most vulnerable in society.

Chiu believed a core factor in the exploitation has been accountability deficits and risk gaps within regulatory and policy environment. She pointed to permitted development rights (PDR), housing law and houses of multiple occupancy (HMOs), the Housing Benefit system and the Regulatory Framework for Social Housing as key policy areas that require urgent reform.

Chiu notes that legal loopholes have allowed for roughly 20,000 exempt accommodation units in Birmingham, of which she states “65 percent are operating as non-social housing, therefore fall outside of the rent standard, and fall outside regulation. Over 90 percent of properties in Birmingham are provided by six Registered Providers, all of which are currently under regulatory view, affecting viability and their governance arrangements.”

But despite the loopholes and accountability deficits, the exempt accommodation market provides invaluable support to a hugely diverse group of vulnerable people. Hence the need for a values-driven approach rather than prioritising a profit-seeking agenda.

Patterson believes that providers and investors must be asking themselves: “How much revenue are you receiving, how much of the revenue are you retaining, and how much are you paying for the capital debt, how much is left for the operation for the supported housing?”

He also spoke about the need for “value generation”, not just profit generation, which Patterson defined as “a set of principles to underpin the measurement of quality in supported housing and the commissioning and funding of supported housing”.

Does Michael Patterson think that the current funding stream in exempt Housing Benefit is secure in the long term or might growing cause for reform impact upon its security and therefore attractiveness for investment?

Patterson: I think that revenue for supported housing is secure because the government doesn’t have a choice about this whether we stick with the exempt accommodation rules which I don’t think we should, or whether we go to Universal Credit. The government said that supported housing will be funded through the welfare system, so why don’t we have an uncapped housing component to Universal Credit which can fund supported housing and what we can currently call exempt accommodation? In terms of investment moving to different places, I think we need a new model of investment, if it’s the money you are after maybe you’re in the wrong market. We’re talking about a reasonable yield here, 6 percent per annum on deployed capital.

Should supported housing be a profit-making business, should there be fixed core rent and service charges?

Patterson: It is a difficult one, if you accept that there is a need for private capital in order to develop new supported housing in which the government seems to think there is because it’s certainly not going to stump up public revenue then we don’t really have a choice about it. I go back to what I said about value generation, I don’t see that there is a problem in generating money within reason from supported housing if you generate value. Outcomes for people, cost benefits for the public purse, wider social and community benefit.

Do you think there is enough cash in the system? You referenced to the fact that providing supported housing is expensive, is the money there?

Chiu: It’s about resource allocation. We are mindful that the supported housing review that everyone was aware of actually totally affected and impacted the market in terms of in terms of bills so extra care accommodation stopped, the supply stopped due to various financial reasons. Allocation of that money into the local authorities and the right type of services is needed, there’s always going to be need for private sector accommodation, I don’t think we’re able to ever build enough, actually that should be an option with the right support.

How does Spring Housing provide adequate and tailored care and support to the different need groups living in their homes and hostels and how does Spring access specific funding for this non-housing element of their work?

Chiu: Part of our work is commissioned services so we have a mixed portfolio, commissioned services allows for some exempt element which pays the housing cost and the enhanced tenancy sustainment. What is extensive housing management support vs what is care and support and that support element and I think the line that one draws and manages that and how you evidence that housing benefit is how we manage delivery of quality services.

Catch up on sessions one, two and three, by following the links below