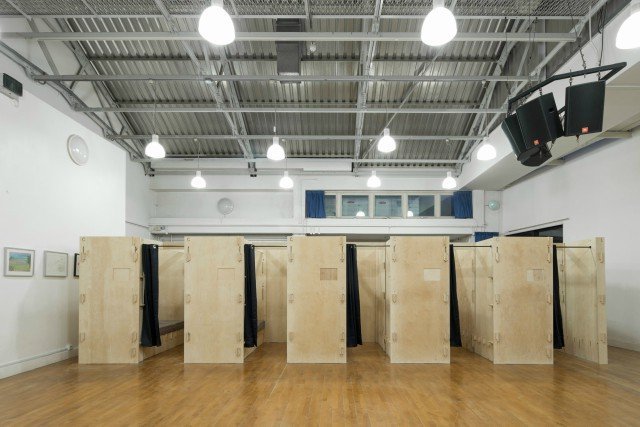 Ten new sleeping Pods have been installed at a homeless shelter in Deptford, south London.

Designed by architects Reed Watts in response to Commonweal’s 2017 design competition, the Pods were assembled at the 999 Club in Deptford following the successful installation of a number of others a few months earlier.

The ten new Pods are an updated design on the original prototype which had been tested by the 999 Club and at a shelter in Hillingdon. The updated designs 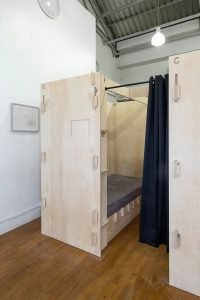 include a raised mattress, which allows to greater storage space.

Originally designed in response to research into tent encampments used by migrant workers, the pods are to be used as temporary, transitional accommodation which look to provide those staying in them with a degree of privacy.

Fashion designer Irene used one of the prototype Pods when she slept at the 999 Club shelter this summer. She has since found permanent accommodation.

She said: “It was much better for me to sleep in the pod, rather than the main hall. It’s tidy, private, warm and it was my own space.”

Tim Fallon, Chief Executive  of the 999 Club, said: “We are excited about launching these sleeping pods, which are the first of their kind in the capital. They will provide very welcome privacy and a quiet space for people who come to our night shelter at their most vulnerable time.”

The Pods have been designed to be practical and affordable to make and easy to assemble with no tools. Reed Watts and Commonweal Housing will release the design on a Creative Commons basis so they can be replicated more widely.

Ashley Horsey, Chief Executive of Commonweal Housing said: “We are really excited that the 999 Club is going to be using more pods and we’re looking forward to further assessing the impact they have on people using the shelter.

“Without collaboration with shelters like the 999 Club we would not be able to test the pods as a temporary form of accommodation, so we’re grateful to be working with them, and looking forward to seeing the results.”

Matt Watts of Reed Watts said: “Having worked with 999 Club, Housing Justice and Commonweal over the past months, we’ve been profoundly inspired by the work they do and the impact that the night shelters can have on the lives of homeless people. By releasing the design as a royalty-free Creative Commons licence we hope to give as many organisations as possible an opportunity to use the pods where there is a need for short-term shelter.”