Skip to content
Home News Exempt From Responsibility? – one year on from a pathbreaking report 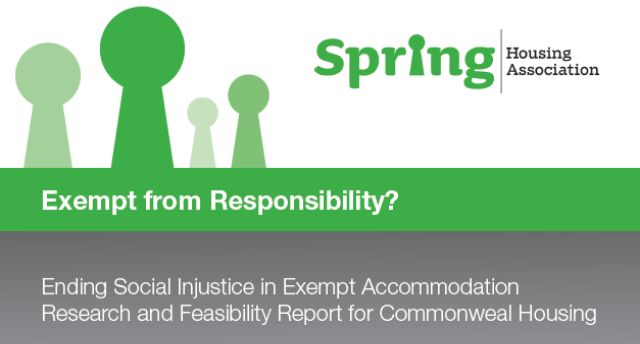 Exempt From Responsibility? – one year on from a pathbreaking report

It is almost exactly a year since we published ‘Exempt from Responsibility?’ and held two lively and oversubscribed launch events in Birmingham and London.

We were aware before embarking on this research that ‘exempt’ accommodation was a significant issue in Birmingham, but were keen to ensure the growth of this sector, and the drivers for social injustices we had evidenced, were recognised at a national level.

We wanted to present the findings in a way that chimed with a wider audience; beyond those for whom terms like ‘exempt accommodation’, ‘housing benefit subsidy’ and ‘lease-based providers’ are readily familiar concepts.

The key to our work is the lives of the many thousands of vulnerable people who are currently adversely affected by this form of supported housing.

A year on and Exempt from Responsibility? has certainly had significant impact. I write this blog just after the publication of the much anticipated Social Housing White Paper, titled a “Charter for Social Housing Residents”. There is a welcome increased focus on resident and tenant experience (consumer standards) and increased powers for the regulator at the heart of the charter –  two of the key recommendations in our published report.

We hope we had a small part to play in that through our partnership with Commonweal and the University of Birmingham, and our collective commitment has helped transform what was originally something of a ‘niche’ concern into a significant and well-publicised national policy issue.

Our report has been quoted in Parliament; read and endorsed by a number of Birmingham MPs and used by them to lobby for reform; featured in Inside Housing Magazine and podcast; and used by a vast range of local and national stakeholders as a template for improved practice and reform.

The Housing Podcast · What is exempt accommodation and why is it becoming a problem?

One of the many reasons we were so pleased to partner with Commonweal on our research was the fact we knew our partnership wouldn’t end the moment the report was published. Commonweal have utilised their many platforms and networks to highlight the issues to a wide range of stakeholders and decision makers, including the MHCLG and the Regulator of Social Housing.

Now, some of the recommendations in the report are within touching distance.

Birmingham City Council have adopted the recommendations of the report, and a local task force has been set up to examine property and support standards, increase enforcement activity and strengthen oversight of this burgeoning sector. A sector which is, as I write this, close to 20,000 bed spaces within the City.

We are also encouraged that the Regulator of Social Housing is taking an active interest in lease-based providers and the ‘umbrella’ model more widely. This is now part of the social housing sector Risk Profile; a significant shift from a few years ago and there has also been increased Regulatory engagement on Governance and Financial Viability fronts. We would just encourage strengthened powers on the third strand of the Regulator’s priorities: the Consumer Standard or, the ‘people bit’, which the report’s recommendations highlight. More widely, the National Housing Federation is in active dialogue with its members, some of whom are the ‘umbrella style’ or lease-based providers that our report focuses on.

In addition, the West Midlands Combined Authority Homelessness Task Force, led by the Combined Authority Mayor Andy Street, has designated non-commissioned exempt accommodation as a key part of the agenda for tackling homelessness within the region. The Task Force is actively taking on the recommendations of our report in order to push for change. Similarly, Birmingham Safeguarding Adults Board continues to designate exempt accommodation as one of their top priorities. Finally, our brilliant friends at Crisis wholeheartedly endorse the recommendations in the report.

The wide and disparate levels of ‘care, support and supervision’, and the inconsistencies in approach and quality within this sector, are neither an acceptable nor sustainable situation.

We are also not asking for more financial investment to come into the sector. We acknowledge that we have never spent more on homelessness, but we want a shift from crisis to prevention. We want greater investment in oversight and rigour, rather than continuing with a system that risks a homeless person being designated as a £250-pound-a-week commodity to a commercially minded provider.

And so, we continue to say, one year on from our pathbreaking report: ‘surely, we can do better than this?’.

With this aim consistently in mind, we have been directly commissioned by Birmingham City Council to co-produce a Charter of Rights – a name we chose before this week’s publication of the Charter for Social Housing Residents! – with and for residents of non-commissioned exempt accommodation. Thea Raisbeck, who authored Exempt from Responsibility? has led this progressive piece of work.

The Charter was co-produced over 12 months with over 50 residents of non-commissioned exempt accommodation and aims to help residents understand their rights and entitlements, and to understand and articulate their experiences and problems more effectively. The project also includes a guide for providers of exempt accommodation, to enable them to most effectively ‘work with’ the Charter; improve and consolidate their practices and identify the linkages between management practices and resident experience. The Charter sits alongside a Quality Standards framework for non-commissioned exempt accommodation, developed by the City with Birmingham Voluntary Services Council (BVSC).

We have been overwhelmed by support for the Charter and guidance document, which have been endorsed by a range of key local and national stakeholders ahead of formal publication. The MHCLG have highlighted the charter as good practice in the recently published National Statement of Expectations for Supported Housing.

More importantly, Birmingham has been funded, alongside four of other local authorities, by the MHCLG to develop and pilot a scheme that aims to increase oversight within this sector. This will include increased staffing, inspection and engagement work around managing and improving housing and support standards as well as the roll out of the Charter of Rights.

When a few of us started discussing this issue around 6 years ago, it was very difficult to get any meaningful engagement at all. Now, a wide range of people are taking on the responsibility for improving standards locally, whilst we continue to campaign nationally for better oversight, better standards, and increased safety for the thousands of often vulnerable adults who live within this sector.

The sometimes small but never insignificant gains and progress we have made since November 2019 would likely not have been possible without the evidence, narrative and clear recommendations we set out in Exempt from Responsibility?.

We hope that we are able to continue our partnership with Commonweal and our many supporters, and progress with our collective endeavour towards  getting a better deal for those that access this much needed style of supported housing provision.