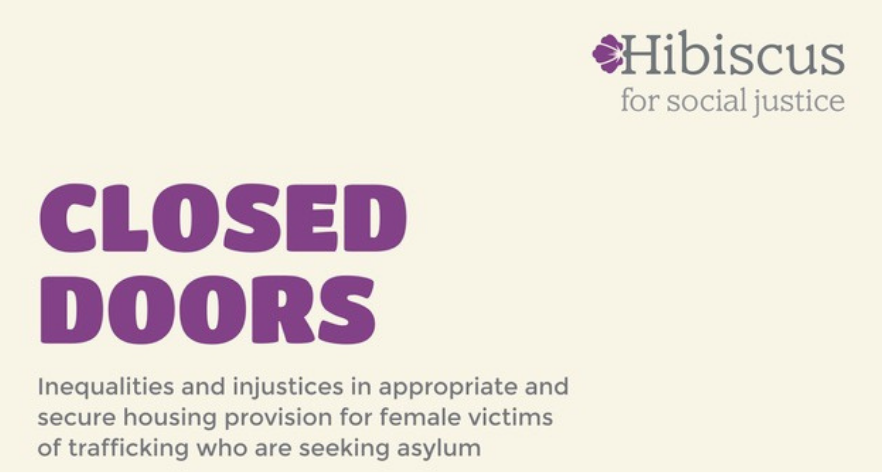 A new report by Hibiscus Initiatives, and supported by Commonweal, finds that the majority of potential female victims of trafficking are unable to access safe houses, with some even facing homelessness. Hibiscus urges that foreign national female trafficking survivors can be housed in safe houses.

Chief Executive of Hibiscus, Marchu Girma: “Safe house provision is important for recovery and wellbeing of women who are survivors of trafficking. The government needs to address failings and gaps by increasing investment.”

The Closed Doors report finds that a significant number of victims access housing provided through Asylum Support, which is not designed for individuals who have experienced trafficking.

Donna, survivor of trafficking and in asylum accommodation said “We are trying to survive from the worse situation, and they are making it worse”

Current legislation states that potential victims of trafficking should be offered safe house accommodation – in which ongoing 24-hour support is available from specialist and trained staff.

Findings of the Closed Doors report:

Recommendations by the Closed Doors report:

Improve Modern Slavery Victim Care Contract (MSVCC) to include explicit policies and procedures to address failings and gaps under the current contract, including the provision of enough safe housing for victims of trafficking.

Improve provision of appropriate and secure accommodation for victims of trafficking. Victims must be informed of their rights and be provided opportunity to participate in decisions around their housing.

Improved comprehensive training must be provided to all professionals and volunteers working with trafficking victims during initial needs assessments and in accommodation settings.

Clearer and stronger monitoring and accountability mechanisms must be implemented to ensure victims of trafficking and victims groups can challenge failure to deliver services under the MSVCC in line with relevant legal frameworks, policies, and procedures.

Ashley Horsey, Chief Executive of Commonweal Housing says: “Commonweal is proud to have supported this research which shines a light on a very concerning housing injustice. It is clear that safe houses provide victims of trafficking with safety, security, and stability for recovery.

“The need for such specialist housing is a recognised key part of this country’s support for victims of trafficking. That so many are not accommodated in a safe house, and are too often being housed in unsuitable or even dangerous situations is an indictment on a system that should be protecting some of the most vulnerable.”

Funding for this research was awarded by Commonweal in 2019, following Hibiscus’ successful application to their Housing Helps competition. Commonweal is an independent award-winning charity working to investigate, pilot, and champion housing-based solutions to social injustice.