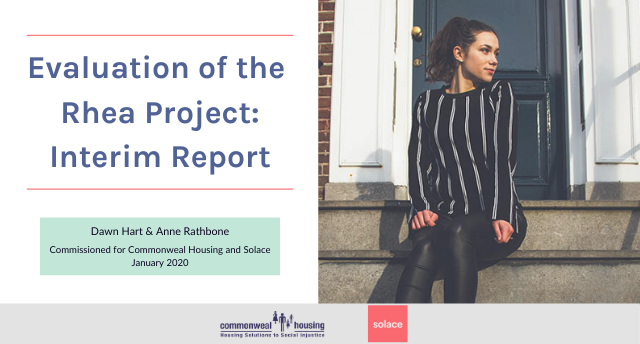 An interim evaluation of the Rhea Project, published today, has highlighted strong partnership working and a vital combination of safe, suitable housing, holistic emotional and practical support, as integral to the project.

Key findings from the evaluation

The interaction of the operating model and the support model were found to be key to the effectiveness of the Rhea Project. The initial provision of housing, as well as the possibility of secure long term housing, provides in itself a boost to the survivor’s emotional wellbeing. It provides space to focus on goals and actions for improving well-being, self-belief, confidence and courage to continue towards independence and freedom from domestic abuse. Training for housing staff through the partnership between Southwark Housing and Solace has also resulted in improved referral pathways, smoother transitions and better outcomes for survivors overall.

The project was found to have positive impacts on women and children in the following ways:

Managers of the Rhea Project and Southwark Housing representatives both felt that the project ‘could and should’ be replicated. With strong leadership within Local Authority Housing Departments, the Rhea Project has the potential to be rolled out nationally.

How the project works

The Rhea Project combines the aims of the three partner organisations into shared outcomes. It supports the aims of Solace by promoting independence through holistic and person-centred support, with a focus on empowerment. In line with Commonweal’s aims, it is an opportunity to pilot a new way of tackling a common social and housing problem, to evaluate and test the potential for replicability elsewhere. It meets the aims of Southwark Housing to meet the housing needs of vulnerable groups.

Survivors are identified and referred via Southwark Housing Department. Assessments are conducted by a Solace staff member who is embedded within the Southwark Housing Team. Following acceptance into the project, the Rhea key worker provides holistic key work support to survivors by delivering face to face visits to the properties. This key worker support includes practical advice around such issues as children gaining places in new schools and helping with benefits forms, as well as emotional support: for example, encouragement and accompanying women to appointments with key agencies.

The eight properties, which Commonweal provides at a subsidised rent, can accommodate women and their children, and are geographically spread across London boroughs to allow survivors to be placed out of the area for their own safety if necessary.

The Rhea Project is designed to provide housing and support for 12 months, with help from the key worker built in to help survivors find move-on accommodation.

Amy Doyle, Deputy CEO of Commonweal Housing, said: “We are delighted to publish these promising interim findings from our evaluation of the Rhea Project.”

“The evaluators have highlighted the benefits of safe and stable accommodation for survivors of domestic abuse and their children, coupled with specialist support from Solace. There is a clear case for the development of similar projects in other areas, and we would encourage anyone from local authorities or organisations interested in doing so to get in touch.”

The evaluation of the Rhea project aimed to identify value, cost, impacts and challenges, and to make recommendations regarding potential for replicability to be of use to various stakeholders working (directly or indirectly) with survivors of domestic abuse.