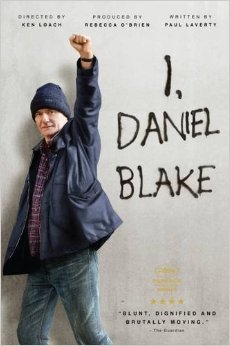 This weekend, my wife (a career local government officer) and I (approaching 30 years in the public, quasi-public and voluntary sector) sat down to watch the Ken Loach film I, Daniel Blake, somewhat late to the party as it came out some months ago, however absolutely better late than never.

It was harrowing, extremely uncomfortable and, notwithstanding the fact that we knew it as a work of fiction, so eminently recognisable. We were both, I am not ashamed to say, moved to tears.

The synopsis of the film is that the eponymous Daniel Blake, a man of 59 who has worked as a joiner most of his life in the North East of England, needs help from the state for the first time ever following an illness.

He crosses paths with a single mother Katie and her two young children, Daisy and Dylan. Katie’s only chance to escape a one roomed homeless hostel in London is to accept a flat some 300 miles away.

Daniel and Katie find themselves in no-man’s land, caught on the barbed wire of welfare bureaucracy now played out against the rhetoric of ‘strivers and skivers’ in modern day Britain.
On screen, I saw and heard the sort of language, rules and telephone on-hold music that is so familiar from the work I do day in and day out.

The over-powering sense was of an individual being crushed by a system, caught up in rules delivered – I have absolutely no doubt – by very well intentioned individuals who see the work they do as helping those in need. People who work in the public sector out of a personal sense of wanting to do some good, but find that it doesn’t always end up that way.

It brought back to me memories of a common view that existed about a certain south London Borough I used to work closely with in my early housing career. It was recognised to be chock full of some of the brightest, most caring and empathetic individuals going, but once they walked through the town hall doors in the morning their collective ability to get anything done correctly or on time disappeared like a proverbial will-o’-the-wisp. Maybe that is just a stereotype fostered by lazy journalism about many of our public services, but perhaps films like I, Daniel Blake are sometimes needed to remind us that just because we intend to do good, and the work we are doing is worthy, doesn’t always mean that we do, in the end, achieve good things for all we meet.

As a Board member of a couple of housing associations we have been reminding ourselves and the wider public of the recent 50th Anniversary of another seminal Ken Loach classic film, Cathy Come Home. We have been showing it again to staff and Board members and using it to promote the excellent Homes for Cathy campaign reminding people of the need for good quality, accessible affordable housing.

However this weekend is making me think that I, Daniel Blake should be the film to show. Cathy Come Home, for all its brilliance, can easily be dismissed by those who wish to as a piece of history, ‘of course things aren’t like that now…’ (they are for some but let’s leave that for the time being….).Whereas this latest work is so relevant, topical, and urgent, it is all the more frightening for it.

I have seen that some have criticised it, which is no great surprise. Former Work and Pensions Secretary Iain Duncan-Smith referred to the film as unfair, aiming particular criticism at its portrayal of Job centre staff, saying: “This idea that everybody is out to crunch you, I think it has really hurt Job centre staff who don’t see themselves as that.” It is not often I agree with IDS, but on this last point I do. Jobcentre Staff do not set out to crunch people. They are overwhelmingly good people wanting to do a good job. But the system they have to implement is the problem. It has been designed deliberately, and with a clear strategic aim, to make it as difficult as possible to navigate and so easy to fall through the cracks and ultimately to “crunch you….”

In the projects supported by Commonweal too many of the people helped are being sanctioned by this pernicious and often unrealistic welfare system, where sanctions are hitting the strivers as much if not more than any perceived skivers.

You then also look at the asylum system that is rarely about helping people and identifying what their needs are from an open and inquisitive starting point; to genuinely understand if they require leave to remain and safe refuge. Instead, again, it is designed deliberately with pre-planning not by some unintended consequence, on the assumption that everyone is lying and therefore the goal is to trip people up.

I believe that I, Daniel Blake should be the first 1½ hours of the induction process for everyone working with members of the public in and around the welfare system. I have heard many good colleagues speak and sound sometimes just like some of the fictional bad guys in Ken Loach’s film. My fear is that I have probably done it myself too, which was why the powerful quote hit home so hard:

“I am not a client, a customer, nor a service user. I am not a shirker, a scrounger, a beggar nor a thief. My name is Daniel Blake, I am a man, not a dog. As such I demand my rights. I demand you treat me with respect. I, Daniel Blake, am a citizen, nothing more, nothing less.”

All in all – a fun Saturday night in at the Horsey house!