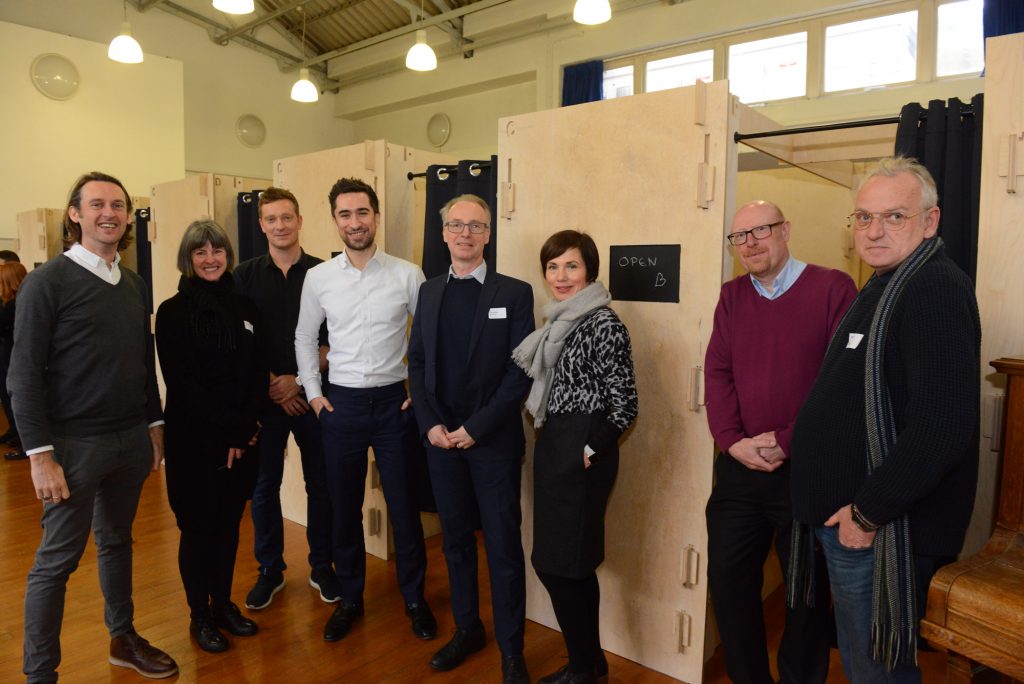 The interlinking structures provide privacy and added security to those using them as temporary bedrooms in the 999 Club’s emergency night shelter.

The pods were designed by architects Reed Watts in response to a competition organised by the charity Commonweal Housing.

A prototype version of them was trialed in two shelters last year, then following the feedback from that, a new version was devised. Some 10 of the revised pods were fabricated and installed by Deptford-based fabricators Aldworth, James & Bond at the 999 Club in December 2018.

Damien Egan formally launched the sleeping pods, writing “open” on the chalk name plate of one pod. The 999 Club is the Mayor’s chosen charity.

The Mayor said: “No one should be forced to sleep rough, even for one night. It was inspiring to open such an innovative project which aims to improve the situation for homeless people in Lewisham. Schemes like this can prove true lifesavers by providing a safer space and respite from the streets, especially during the cold winter months.

“These sleeping pods would not have been possible without the support of the 999 Club and everyone else involved. The commitment and hard work that has gone into this innovative project shows the best of community spirit of Lewisham.” 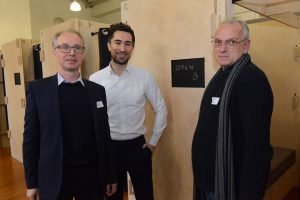 Lewsiham Mayor Damien Egan with Tim Fallon, CEO of the 999 Club and Nick

The pods have been designed to be practical, affordable to make using widely available, locally-sourced materials and easy to assemble with no tools. Commonweal and Reed Watts also plan to make the design, cutting and assembly instructions freely available so they can be fabricated by companies world-wide for charities and organisations providing emergency accommodation for homeless and vulnerably housed people. As such, the pods have attracted significant interest from charities across the UK and internationally.

The pods stands 2.1 metres high, 2.1m in length and 1.9m wide, are made of 18mm thick, fireproof birch plywood and have privacy partitions with a raised platform for a mattress that acts as both a bed and a seat as well as storage space for personal belongings. Two of the side panels are shared with the adjacent pod, and a curtain on a rail can further close off the personal space at night-time.

Pods have since been installed at the Pilion Trust Crash Pad in North London and further pods are proposed for a Housing Justice shelter, also in North London.

Bill* , who has used one of the pods while staying at the 999 Club’s night shelter this winter, said: “I like that the pod gives me privacy and I can keep all my belongings in one place, plus I can sit and think about things without other people trying to talk to me.”

Mick*, who has been at the Night Shelter since late last year, said: “It’s very good to have my own space and to be able to close the curtain when I want.”

Tim Fallon, Chief Executive of the 999 Club said: “People who use our night shelter have been very positive about the pods, highlighting how they appreciate the privacy and personal space – two things which are important, but sadly missing for so many people who are homeless or rough sleeping. The pods are not intended as housing; our aim remains to rehouse people from the night shelter into sustainable accommodation as soon as we possibly can.”

Ashley Horsey, Chief Executive of Commonweal Housing, said: “As an action learning charity Commonweal trials new ideas and we wouldn’t be able to do that without willing partners like the 999 Club. It is really encouraging that people are interested in the Pods and now they are operational at a few locations, we are looking forward to seeing the results of the independent evaluation we have commissioned later this year.”

Matt Watts, of Reed Watts architects, said:  “Having worked with 999 Club, Housing Justice and Commonweal over the past months, we’ve been profoundly inspired by the work they do and the impact that the night shelters can have on the lives of homeless people. By releasing the design as a royalty-free license we hope to give as many organisations as possible an opportunity to use the pods where there is a need for short-term shelter.” 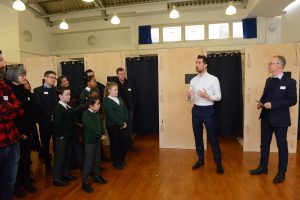 Tim Hill, Creative Director at Aldworth James & Bond, said: “Making is at the heart of what we do. We first got involved in the project from an enquiry with Reed Watts. and immediately it was something we became excited about. We know the work of the 999 Club and they’re local to us in Deptford. So, when this came in from Reed Watts it’s something we got behind straight away.

“The benefit of the design is that it is modular and that it can be built quickly and effectively, in almost any space. It can be deployed very efficiently, it can be shared and cut locally and it doesn’t require special tools to assemble.”

A group of children from Rathfern Primary School in Catford, accompanied by teacher Michelle Henderson-Vieira, also handed over 80 packs of sleeping bags and toiletries collected for homeless people in South London by the school’s community ambassadors’ club.

The club chose homelessness as their project and successfully bid for funds from Team London Young Ambassadors.  After researching homelessness and creating an action plan, the club put together the care packages using their grant money, and will undertake an awareness campaign.