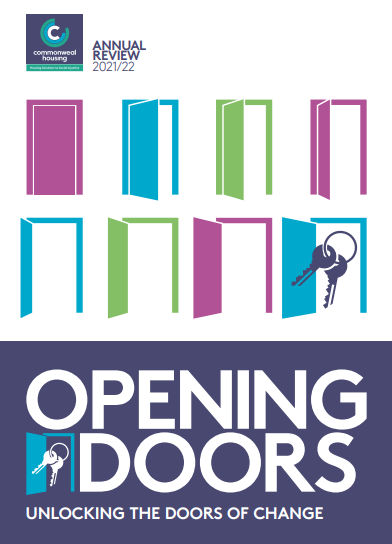 Commonweal Housing is delighted to announce its 2021/22 Annual Review ‘Opening Doors: Unlocking the Doors of Change’.

The Annual Review treads through the path of the charity’s last twelve months, which saw it make major strides in pushing for reform in the exempt accommodation sector, sign new project partnerships, fund major research projects, and support on-the-ground efforts in Ukraine, as well as continue its progress across its stable of housing projects.

Last year, Commonweal re-opened its project partnership programme Call for New Ideas for a third time, inviting organisations to apply for funding for feasibility studies to test housing solutions to social injustices. Commonweal was particularly interested in inventive ideas to tackling injustices around its core themes: the criminal justice system, violence against women and girls (VAWG), and injustices that occur during transitional points in people’s lives.

As a result, the charity agreed to fund seven new and imaginative feasibility studies, with one already progressing into the project development stage. The Hosford Community Homes project with the Northern Irish church East Belfast Mission aims to house and support homeless people in East Belfast transitioning towards independent living.

Following the success of Call for New Ideas 2021, Commonweal once again reopened the process this year, with a positive number of intriguing and innovative projects proposed by a diverse range of organisations.

The Annual Review also celebrates the doors that Commonweal has opened throughout its 13-year history, covering the successful support the charity and its partners have provided, and continue to provide, to key marginalised groups.

This has included accommodating and supporting 29 women who have escaped sexual exploitation with Solace Women’s Aid, housing 46 destitute migrants with Praxis Community Projects, and helping 30 young adult carers find their feet and move towards independent living with Quakers Social Action.

Commonweal also played a pivotal role in drawing political and media attention to the injustices surrounding the exempt accommodation sector. This included writing a joint open letter to the Government with the Local Government Association on behalf of 81 organisations and individuals featured on BBC Radio 4’s Today Programme, as well as participating in the oral evidence of the Levelling Up, Housing and Communities Select Committee inquiry into exempt accommodation.

Ashley Horsey, Chief Executive at Commonweal Housing, said: “I am extremely proud of all that Commonweal has achieved this past year. It has been a year of transition and one defined by the doors that we, and others, have opened. As we look back on another year in this organisation’s history, we want to ask you to also look forward: on ways in which we can collaborate, partner, and invest in a future that delivers real, long-lasting change for the people that need it most.”