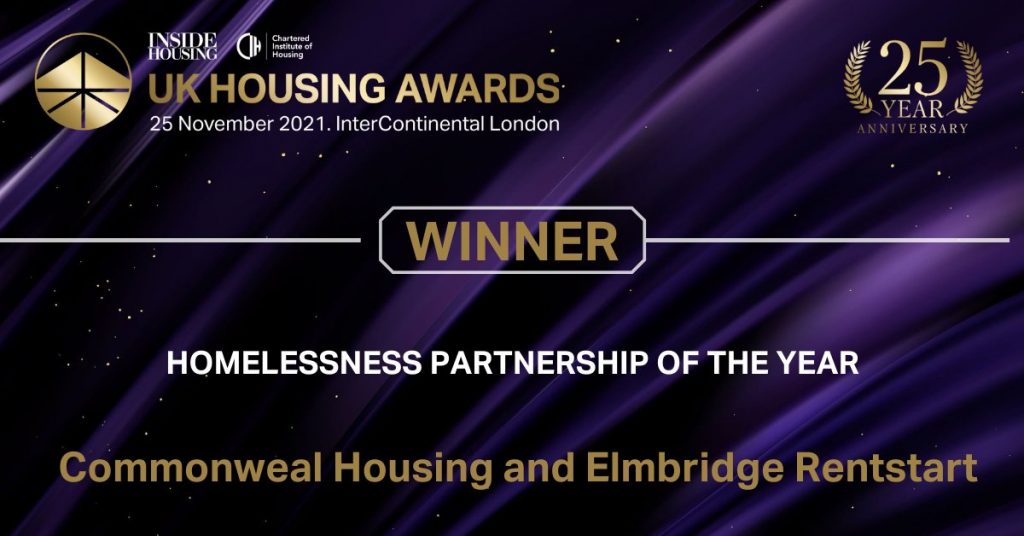 Commonweal and Rentstart win Homelessness Partnership of the Year

Commonweal Housing and Elmbridge-based homelessness charity Rentstart have won the Homelessness Partnership of the Year at UK Housing Awards, the industry-leading award ceremony focused on the social housing sector and ran by Inside Housing.

The award was in recognition of the Freedom2Work model developed by Rentstart and supported by Commonweal. The project presents a combined offer of stable accommodation, wrap-around employment support, and a matched-savings scheme for homeless individuals, to bolster their financial security and break the cycle of homelessness and unemployment. Over five years, 75 percent of clients have been supported into work and half into independent housing.

The Homelessness Partnership of the Year is awarded to partnership initiatives that deliver impactful and innovative methods of tackling homelessness with a high potential to replicate. The UK Housing Award judges noted on the night that Freedom2Work won the award in acknowledgement that ending homelessness is “about more than just bricks and mortar”.

The ceremony took place at the InterContinental Hotel at the O2 Arena, Greenwich, and Commonweal and Rentstart beat well-established competitors and major organisations to this year’s gong.

This marks the first time the Freedom2Work model has been formally recognised with an award. However, the project is also up for two further awards at RESI Awards for Social Initiative of the Year and People First at the Homeless Link Awards.

Commonweal and Rentstart will be continuing to champion Freedom2Work as they look to begin national replication of the model. If adopted at a national-scale, the model could in theory support three-quarters (53,000) of people experiencing or at risk of homelessness into employment, while saving more than £600m to the public purse.

Ashley Horsey, Chief Executive at Commonweal Housing, said, “We’re immensely proud to see the impact and innovation of Freedom2Work recognised with this prestigious award. It not only demonstrates the incredible imagination of our partners Rentstart, but gives us further confidence that this is a model with enormous potential that can truly break the cycle of homelessness and change the lives of thousands.”